Born and raised in Brooklyn, Laura graduated from Brooklyn College with a degree in Fine Arts in 1965. She studied with noted painter Ad Reinhardt as she has absorbed some of his minimalist techniques in her work.

Since 1967, Laura has been creating still lifes carefully observed from life in oil, watercolor, pencil, silverpoint, and lithographic prints, and considers herself to be a contemporary realist. In 2002, she started painting and drawing photo-based cityscapes. Her first solo show was in 1971 and since then she has exhibited in solo and group shows throughout the US, with many of her works being included in several museum collections, including the Brooklyn Museum. Laura has taught and lectured at Parsons School of Design and the National Academy of Art, and has curated a few shows in NYC… In 2000, she was elected to the National Academy of Art, NYC. 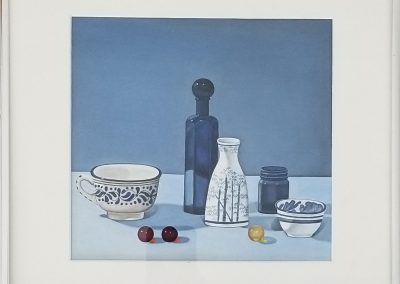 Still Life with a Yellow Marble